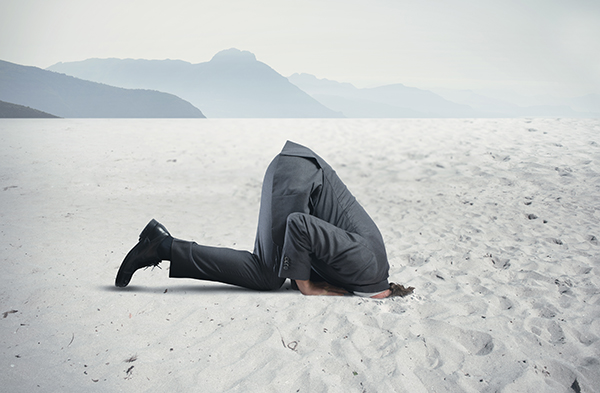 Psychologists have identified a phenomenon called the “ostrich effect” whereby people prefer not to look at information because of the fear that they may receive bad news – despite the prospect of making better decisions based on this information. Like the ostrich that supposedly hides by sticking its head in the sand, people sometimes have a tendency to “bury their head in the sand” and intentionally avoid or reject information that would help them.  Although the idea that ostriches hide their head in the sand is a myth – contrary to popular belief, ostriches do not actually bury their heads in the sand – research shows that, in all sorts of situations, people do avoid confronting information.

Ostrich-like behaviour is observed in many situations in which people are emotionally invested in information and have some ability to shield themselves from it.  For example, in the medical context people may sometimes choose not to book an appointment to see a doctor in order to avoid receiving potentially threatening information about their medical condition even if such information could potentially provide information that would improve the quality of their health and wellbeing.

Studies of the delays in diagnosis for lung disease and cancer have shown that some symptomatic patients delay visiting doctors for longer when their risk of serious illness is higher or when they perceive the symptoms of an illness as more serious.

As well as avoiding negative information people may sometimes seek out and relish positive information. One study found that people who recently purchased cars are subsequently more attentive to advertisements for the model which they bought compared to the other models they had considered buying. Having made a decision, people prefer to select and consider information supporting their decision rather than risk encountering conflicting information.

Similarly, another study found that smokers made more effort to listen to pro-smoking messages than non-smokers, and non-smokers made more effort to listen to a message affirming the link between smoking and lung cancer than smokers. The evidence indicates that, for both positive and negative information, people seek out or avoid information depending on their expectation of its emotional impact.

Recent studies in neuroscience show that the same regions of the brain that are activated during the experience of a painful electric shock are also activated in individuals anticipating the impending painful experience. The brain activation increases as the time of the shock approaches – consistent with the notion that the information that one is going to receive an electric shock – is, like the shock itself, a source of misery.

While people often enjoy looking forward to pleasurable events – anticipating a pleasure is a pleasure – but the anticipation of unpleasant events is unpleasant, before the event itself occurs. Indeed, in this neuroscience study, thinking about the shock was so unpleasant that people were willing to suffer more pain – a higher voltage shock– in order to reduce the time they spent dreading the impending shock.

What the research shows is that information is not just information; it can also be a source of pleasure and pain in its own right. This is worth thinking about when dealing with matters in your own life. Might you be avoiding exploring an issue for fear of what you might discover?